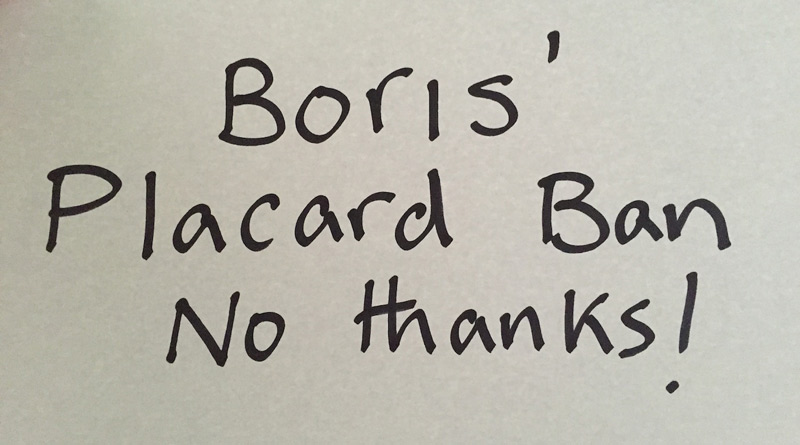 #####What
All London Mayoral Candidates Invited to stand with placard of their choice.

This is an invitation by Green Party Mayoral Candidate Caroline Russell to all London Mayoral candidates to stand with her to defend free speech in Parliament Square with a placard of their choice on Thursday 6th August, at 6pm

#####Why
On that day a lone protester, Ryan O’Sullivan is facing a criminal trial in Westminster Magistrates Court, for simply standing in Parliament Square in October 2014, with a placard stating “Occupy Democracy”.

He was protesting at the hijacking of our democracy by corporate lobbyists. He is charged with breaking the Parliament Square bye-laws adopted by Boris Johnson, which require permission to hold a banner in the square.   When he applied for permission last week to hold a banner protesting against his arrest for holding a banner, Boris Johnson’s  London Assembly refused him that permission.

The reason they gave was that even though he was applying for permission to hold one banner, he had not provided proof that he had £5 million worth of public liability insurance, which they were insisting that he have.

Caroline Russell said “This is a unique opportunity for all the London Mayoral candidates to demonstrate that they support free speech, that they oppose the destruction of the right to democratically protest and oppose the privatisation of the freedom to assemble.”

She added “Even if other Mayoral candidates cannot make the placard holding event at 6pm,  I ask them to support the call for abolition of the recently adopted London Assembly byelaws that require permission is sought to hold a placard in Parliament Square and that  protesters have public liability insurance.”

She finished: “ My heart goes out to Ryan for the ordeal he is going through this week.  If I was the Mayor, no one would ever suffer like this again, simply for holding a placard in London.  Our democracy is too precious for it to be destroyed by Boris Johnson’s legacy.”