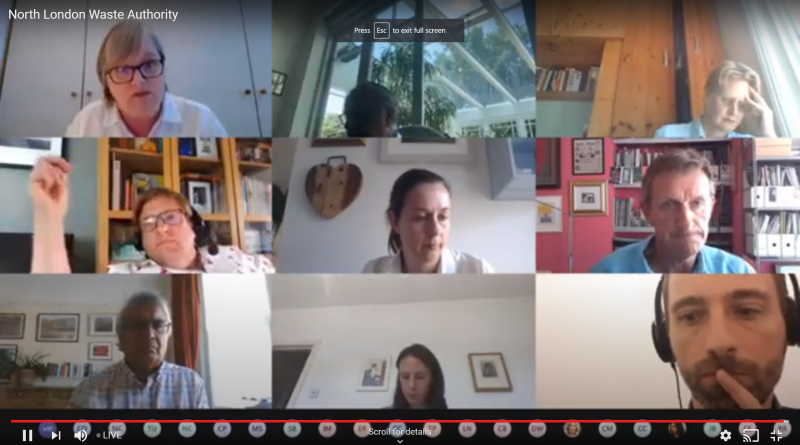 On Thursday 25th June, I joined a deputation of national and local politicians, doctors and community members to the North London Waste Authority (NLWA) meeting, to make the case for them to pause and review their plans to build a 700,000 tonne-capacity incinerator in Edmonton.

Disappointingly, the NLWA did not discuss the deputations so it was hard to tell what each of the members thought of the cases we made. I will be a submitting a question to the Mayor asking him call on the NLWA to pause and review their incineration plans.

You can find the video link to my speech here, just scroll back to the beginning to hear the meeting from the start. This is what I said:

I’m Caroline Russell, Green Party London Assembly Member and an Islington councillor. I am speaking today in my capacity as London-wide Assembly member to request that the North London Waste Authority board pause and review the incinerator plans so that North London benefits from a more sustainable waste solution.

I was the only councillor to speak out against this incinerator when it went through Full Council in Islington. As an Assembly Member I have consistently opposed Energy from Waste on the basis incinerators undermine recycling and the circular economy, contribute to air pollution and greenhouse gas emissions and that London already has more incinerator capacity than it needs.

I’m going to look at recycling rates, the circular economy and overall waste arisings as I make the case for you to pause and review.

London has the highest incineration rate across the UK, at 59.6 per cent. The Mayor of London’s Environment Strategy makes it clear that London should be a zero-waste city. I quote: “By 2026 no biodegradable or recyclable waste will be sent to landfill, and by 2030 65 per cent of London’s municipal waste will be recycled.”

We’ve seen the negative impact of increased incinerator capacity on recycling rates in the Western Riverside Waste Authority Boroughs (Lambeth, Wandsworth, Hammersmith & Fulham and Kensington & Chelsea) where recycling has fallen each year since the Belvedere Energy from Waste plant in Bexley went into operation in 2012. On average these four councils recycling rates went down by nearly 4 per cent from 2010 to 2016, making three of them in the worst six councils for recycling in England.

Not only does increased incineration capacity not support the Mayor’s target for London to be a zero-waste city, it also goes against the proposal (7.4.1.b) in his Environment Strategy that says: “The Mayor will support the development of new waste infrastructure supporting the circular economy outcomes of reuse, repair, and remanufacture.”

This is further emphasised in the Mayor’s new London Plan, specifically Policy SI 8(B): “Development Plans should identify how waste will be reduced, in line with the principles of the Circular Economy”.

Even the NWLA’s Residual Waste Reduction Plan 2020-22 says that its objective is “To reduce local authority collected waste arisings in north London, promote resource efficiency and the circular economy, minimise climate impacts and improve the local environment.” Your own aims literally back the case that you pause and review.

If you go back a step in the waste management process, what we actually need to be doing is help boroughs to reduce their arisings and cut the overall turnover of stuff. The London Waste and Recycling Board (LWARB) appointed Arup in 2016 to investigate the effect of applying circular economy initiatives to waste arisings across London. It focused entirely on achieving waste prevention, as opposed to managing waste. It found that even with a moderate take-up, the result would be a 30 per cent fall in overall London waste – the greater part of this by 2035ish, the life of the North London Waste Plan.

The decision to increase incineration capacity was based on predictions back in 2009 of an increase in the total generation of waste (arisings) for North London due to increasing population figures. In reality the seven boroughs actual arisings did not rise as expected and have been declining since 2015/16. By 2018/19, the seven boroughs were actually producing about 150,000 tonnes less waste than the NLWA had predicted and therefore about 75,000 tonnes less residual waste than predicted. This calls into question the initial rationale for building more incineration capacity in the region.

If extra waste has to be shipped in this will produce additional carbon emissions and road congestion, adding to the air pollution emitted by the facility itself and there will be no incentive for the boroughs to contribute to the circular economy, or to increase the proportion of waste recycled and reduce their overall arisings.

I’ve focused on the way that the increased incinerator capacity is incompatible with the need to increase recycling rates, boost the circular economy and reduce overall waste arisings. I know others will be looking at this through a climate crisis lens which reinforces the points I’ve raised and the case to pause and review.

Finally, from the perspective of dealing with the coronavirus crisis and its as yet unquantified impact on our economy, it is only prudent to pause and reassess all the modelling and assumptions that led you to a solution that commits north London to producing increased levels of residual waste to keep this proposed incinerator running.