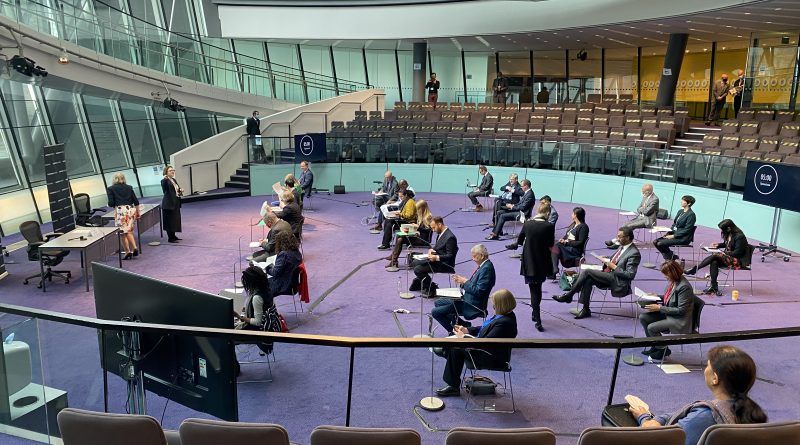 Today was the London Assembly’s annual meeting where we agreed the membership and chairs of scrutiny committees for the year ahead. We were very disappointed at Labour initially trying to block the Greens from chairing the Transport Committee and we worked hard for a fair cross party agreement. Disappointingly Labour refused in the end to chair any committees when they did not have the votes to impose their preference.

We are grateful to the Lib Dem and Conservative groups for standing up at this meeting for a proportional distribution of scrutiny work amongst the four parties elected to the Assembly and we look forward to disagreeing sometimes on the many policy issues to come, including the Silvertown Road Tunnel, but the principle of democratic scrutiny is something we can agree on.

Here is the press release we have issued today.

Conservative, Green and Liberal Democrat Members have been working to secure a four party agreement for chairing the Assembly Committees, based around the proportion of seats each group has on the London Assembly.  The proposal would have allowed Labour to chair five committees, the Conservatives four, Greens one and the Liberal Democrats one in the first year of this administration.

At the 11th hour, Labour decided to walk away from any agreement and refused to chair any Committees.

Green Leader Caroline Russell AM said:
“City Hall Greens are strong believers in proportional representation and have worked hard to achieve a fair, and proportional, arrangement for our cross-party scrutiny work on behalf of Londoners. We hope Labour will come back to the table and fully participate in Assembly work to serve the interests of Londoners.”

Liberal Democrat Leader Caroline Pidgeon AM said:
“It is with sadness and regret that a four-party agreement has not been reached on the allocation of Chairs of Committees based on Assembly seats.
“Up to the eleventh hour every effort was made to reach such an agreement.  I am only sorry that Labour have chosen not to join us.”

Conservative Leader Susan Hall AM said:
“It’s disappointing that Labour Members on the London Assembly have abdicated their responsibility to hold the Mayor to account. Instead of agreeing to a fair deal on the Assembly’s committees, ensuring all Londoners’ views are represented, they’ve refused to chair a single one. It’s only been a week since the election, but they’ve already let Londoners down.”