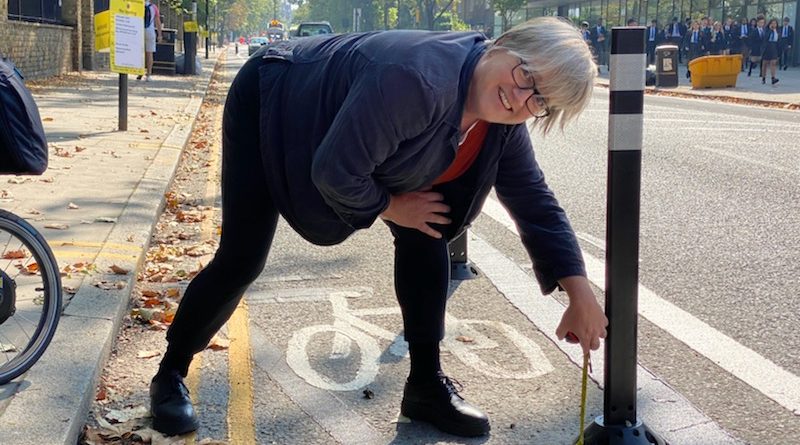 During an election campaign political parties get asked to sign up to support campaign issues that they will work on if elected. Below is my response to Stop Killing Cyclists that sets out answers based on the Green Party manifesto to a wide ranging set of ten questions that affect people who ride bikes in London.

The Green Party’s transport policy set out in our manifesto takes account of London’s difficult current circumstances, both the urgency of the climate emergency and one year into the on-going pandemic the dire consequences of Transport for London’s finances being utterly broken by dependence on income from bus and tube fare payers.

Sian has asked me to reply to your election questionnaire. Before answering your specific questions I want to set some overall context based on our Green Party manifesto that will underpin the work of Transport for London (TfL) under a Green Mayor.

A Green Mayor would set the right targets to achieve zero carbon transport by 2030 and we believe this can be done working within existing mayoral powers.

We would replace the current Mayor’s proposed ULEZ scheme that stops short at the north and south circular with a smart, fair, privacy friendly road pricing scheme that would reduce miles driven as well as cleaning up vehicle emissions all across our city. This would be consulted in 2021 and implemented by 2023 and would mean that people driving, not just people paying to catch the bus or a tube are funding TfL.

The pandemic has broken TfL’s finances and exposed the lack of resilience in a model with the majority of income coming from fare payers. Our plans to get drivers to pay per mile for using the roads will broaden the base of income and start to return TfL’s budget to pre pandemic levels. Without a TfL government funding deal in place it is very difficult to make specific commitments on funding as we don’t know what level of funding TfL will end up with after the election, but we’ve answered your questions as best we can with the information currently available.

I hope the answers below are helpful and we look forward if re-elected to continuing the discussion on making London a city fit for walking and cycling. Do please read our manifesto it has lots more detail than I’ve included below.

1. 20% BY 2026
Will you commit to investing 20% of TfL budget on cycling & walking infrastructure by 2025 (roughly £2 billion per year), as recommended by the UN? This equates to £125/person per year and would raise modal share by about 5% per annum.
Under a Green Mayor, all TfL’s work would be focussed on the mission of achieving net zero carbon transport by 2030, reducing traffic, cleaning up the air and increasing trips walked and cycled. In terms of specific walking and cycling schemes we would treble current investment in walking and cycling to £45 per head per year (£400m). Previous Mayors have repeatedly underspent their budgets particularly on cycling and then rushed investment at the end of their term. Instead we would move to a regular, pipeline of consistent, high level investment in our streets that would enable walking and cycling to be an everyday choice for far more journeys in inner and outer London.

2. MINI-HOLLANDS FOR ALL
Will you provide a £50 million Liveable Neighbourhood Fund for each London Borough to fund LTNs for all residential areas & protected cycle-networks where needed?
Our manifesto commits to increase the rate and pace of delivery in Low Traffic Neighbourhoods and Liveable Neighbourhoods programmes, with a focus on enabling every borough to match the ambition of the successful Waltham Forest mini-Holland scheme. With bidding every quarter and regular development of bids by boroughs, the rate of change throughout London will speed up.

3. PHYSICALLY PROTECTED CYCLE-LANES
Will you commit to having completed the planned protected cycleway network outline in the Cycling Commissioners proposed programme by the end of 2026? Will you proceed with installation of protected cycleways along the TERN network within ULEZ that you already control?
Assuming TERN is typo for TRLN.
Working across the whole of London, not just inside the ULEZ boundary, a Green Mayor will develop a coherent network of safe cycling routes using both temporary measures to roll out protected bike lanes at pace and tackling the difficult hostile junctions that need a full redesign to work safely for people walking and cycling. This will cover both the TLRN and borough roads and we will use the Mayor’s convening powers to ensure routes are coherent and connected.
Main roads will also get new design standards – our investment plans to improve main roads will make sure they include frequent opportunities to cross the road, side roads with continuous footways across the junction, protection at junctions for cycling and protected bike lanes with accessibility friendly bus stop bypasses.

4. LONDON 20 MPH ZONE
Will you extend the 20mph speed limit out from the congestion zone across London (excluding motorways)? And reduce speed limit within CCzone to 15 mph?
A Green Mayor will set a 20 mph default speed limit on Transport for London roads everywhere there is a pavement, to protect people where they live, work, shop and walk, requiring a special case to be made for any increase on specific roads. Our call to get the current Mayor to consider this was rejected by Labour and the Conservatives in the London Assembly.
We love your suggestion of 15 miles an hour in central London and will work on this, but our policy making process is democratic and we cannot simply commit to this without going through proper party processes.

5. IDAHO LAW
Will you support the introduction of the Idaho law, allowing cyclists to turn left when traffic is free at junctions, with full legal priority for pedestrians, when doing so?
We support the turning the corner campaign and advocated that the Mayor take this up with the government as a recommendation of my Hostile Streets report for the Assembly Transport Committee in 2017. A Green mayor will work with the Department for Transport to address gaps in road design rules that would help make safer conditions for walking and cycling.

6. CONGESTION CHARGE FOR CAB-USERS
Will you introduce a £5 congestion charge for all cab-users (other than disabled), along the lines introduced by New York last year, to help fund the Mini-Holland and Cycleway programme and to tackle the single biggest source of congestion in central London?
Uber and other Private Hire vehicles currently pay the congestion charge. Taxi drivers have a separate licencing scheme and any change would need to be negotiated with Taxi representatives.
Given the pandemic and the collapse in the cab trade, we feel it would be more constructive to focus on helping taxi drivers to play their part in a green recovery with electric cabs providing a service for Londoners who will be giving up on car ownership.

7. PEDICAB PROMOTION
Will you support the introduction of a fair regulatory regime for pedicabs, promote their use and install pedicab stands across central London, including at train-stations?
We support companies like pedal me who have set up a bike taxi and delivery service. We are calling for delivery hubs on high streets and toilets and rest facilities for delivery riders. We would consult and work with bike delivery and taxi firms to establish a fair regulatory regime in London that allows bike powered taxi and delivery services to thrive and operate safely in London.

8. LEFT HAND TURN EMERGENCY PROGRAMME
Will you support an emergency programme of installing safe protected left-hand turns at a minimum at the 500 junctions that were originally promised to be reviewed by Boris Johnson? (NB These were subsequently cut to 33!)
The programme of 500 junctions has been dropped by TfL and the current government funding freeze due to the pandemic means TfL is currently doing nothing outside the emergency Streetspace measures. A Green Mayor will be committed to achieving  zero road deaths and serious injuries and tackling dangerous junctions is a crucial part of this so it would be a priority as funds become available.

9. END THE BOROUGH VETO ON CYCLEWAY INSTALLATIONS
Will you support and lobby the Department for Transport for the legal powers, to over-rule Borough and Crown Estate Paving Commission vetoes on strategic cycleways across London, but retaining Borough veto on their removal?
The Mayor of London already has the power to take borough roads into TfL control, however the current Mayor has been too timid to use the powers he already has. Greens on the Assembly proposed a motion in 2018 calling on the Mayor to take over Oxford St after Westminster Council vetoed the current Mayor’s plans. A Green Mayor would use those powers for example in the case of Kensington High Street. Although it should be noted that the borough blocking safe cycling is conservative controlled and the Mayor may be overruled by the (conservative) government.
Our manifesto commits that a Green Mayor would lobby the Crown Estate Paving Commission working with campaign groups and NGOs working on active travel, accessibility and health to build the case for traffic removal from Royal Parks.

10. CAR-FREE LONDON SQUARES AND STREETS FIT FOR HUMANS
Will you support a programme of making major squares, shopping streets and whole areas of central London fit for humans, by making them car and cab-free (other than for the disabled) & closing them to through motorised transport, including Oxford Street, Trafalgar Square, Piccadilly, Parliament Square, Bank Junction etc
Our manifesto commits that a central London zone, some residential areas and key town centres across London, will be set to be permanently free of all private car journeys by 2030, and a programme of car free streets, days and weeks will begin immediately to demonstrate the benefits and the best areas for these zones.