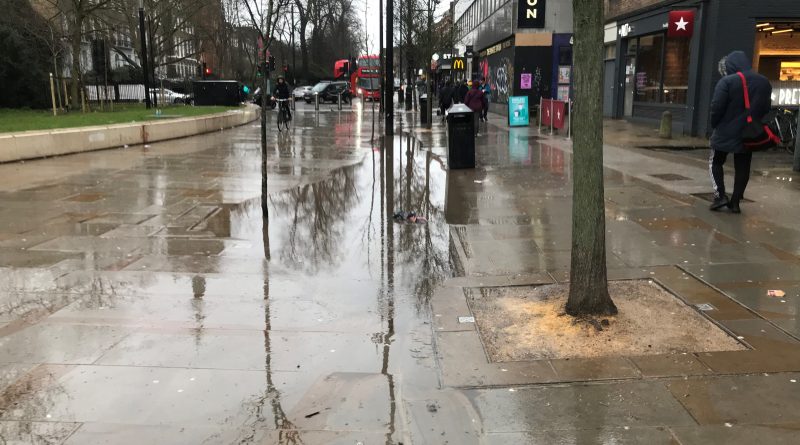 Highbury Corner has been a building site for years as the bridge under the road was repaired and then the Mayor’s junction safety scheme was installed. The aim was to make a traffic heavy junction safer for people walking and cycling, which has mostly been achieved but there are still  a lot of teething problems more than a year on.

The most visible problem is the Highbury Corner puddle also known as the boating lake or skating rink running the length of the pedestrianised arm of the junction. I’ve seen Torvill and Dean photoshopped on the frozen puddle on Twitter in winter and last week someone posted a radio operated boat buzzing busily across the water.

I’ve gone back to check photos taken when I inspected the work site as Highbury Corner was being transformed and I’m now pretty certain that the new Sustainable Drainage System (or SUDs) that went in is not working – the puddle is directly above where it was installed. 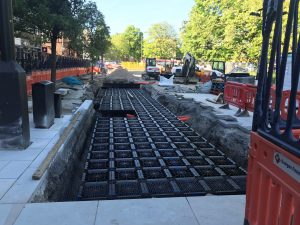 My inbox has been full of concerns about the puddle. I’ve raised it at every level – with Transport for London (TfL), making a site visit with an engineer and even with the Mayor at Mayor’s Question-time – TfL insist this is some other drainage issue.

They have tried repeated jetting of the existing drain to make it work, but this has proved unsuccessful. TfL have now said:

“We are to clear the drainage grates around the tree pits again and install a length of drain to try and increase the capability and capacity of the water to drain in to the SUDS. We are aiming to complete this before close of contract on 31 March. We will then have to monitor to see if that has rectified the issue, if not we of course continue our investigations.”

The drainage must work properly so that the new public space is fully available and so people don’t risk getting wet feet walking through the space or slipping on the ice when the puddle freezes.

Traffic at Highbury Corner has remained stubbornly high. I am hopeful that wider measures across the area will reduce traffic in time, but I have asked TfL to look again at how they can prioritise buses and use enforcement to stop impatient drivers blocking the junction. All too often one drivers’ impatience can lead to queues that block the junction meaning it works less well for everyone. It’s not fair that people walking and cycling wait for safe passage only to have it blocked by a queuing vehicle, or even to have a driver moving across their green signal. Equally, it’s not fair to people on the bus or in cars to be waiting extra time to get through the junction because of the impatience of others.

TfL have not been able to offer a solution to these issues, but they are looking at the potential for changes in road markings and examining the possibility of more enforcement activity.

TfL needs to be much smarter about how they combine their work on junctions with the effects of apps like Waze or Google Maps. When observing the junction, I’ve noticed that traffic queues fluctuate between Upper Street and Canonbury Road, the arms from the south – and given the number of drivers who seem to be looking at phones I wonder how many are being redirected by a GPS in their car faster than the Scoot (smart) signals system at the junction can react to the changes in the queues.

In addition, if I use an app like CityMapper or Google Maps to get a cycle route from my home in Highbury to City Hall I am directed to cycle through the pedestrianised space. I told TfL about this issue months ago, and they say they will eventually update some signage, but I think they need to ensure data provided to these firms by TfL stops this from happening. I totally sympathise with the many older and disabled people who have contacted me about this, but until TfL tackle the mapping apps directing people to cycle through the pedestrian space, it is very hard to sort this out.

Highbury Corner’s transformation has been years in the making. It represents a huge investment in making Highbury Corner a safer and more people focussed place – the Mayor and TfL are not looking after that investment or yet making it count. They need to show they care it works in practice.