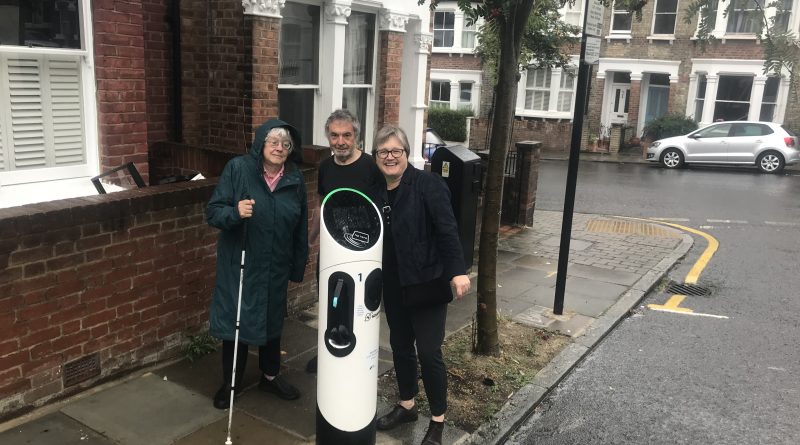 There’s a new tension in London between the future of vehicle travel and people on the pavements – as infrastructure for electric vehicles muscles in on space meant for pedestrians.

Councils excitedly preparing for e-vehicles are whacking up charging points without pausing to think. A number of Londoners have contacted me to express concerns over their pavements becoming a slalom, as new EV charging points and their electricity supply pillars are blocking wheelchairs, prams and putting new obstacles in the way of people with limited vision or mobility as trailing wires snake over the footway.

In my home borough of Islington lots of new charging points have popped up, including some that taper the pavement to an uncomfortably narrow squeeze. In one case the luridly bright green light on top of the charging post shone directly into someone’s home and the whole structure emitted a noisy electric hum. Ultimately the only fix was to take out the charging point completely.

Placing charging points on the pavement is much easier legally, and operationally, for councils than placing them on the road where they could more easily serve their purpose of charging cars. But why should people give up their public pavement space for infrastructure designed for fuelling private vehicles and run by private companies?

I am concerned that a lack of standards and requirements from the Mayor of London, TfL and London boroughs has let companies and boroughs be too lax in the design of charging points.

After I asked a series of questions in the Assembly last year, Transport for London committed to providing up-to-date guidance where presently there is effectively none. I am still waiting for this to be published, it was promised early this year, and I would like to remind Transport for London of what suitable guidance must do.


Firstly, guidance needs to protect and respect existing users of pavements. The most straightforward way to do this is simply not to place charging points on the footway, but instead in space already designated for car use, on a pavement build out in a parking bay. This could even provide an informal crossing point where people can stand to see and be seen by on-coming traffic when crossing the road.

Secondly, consideration has to be given to other impacts of charging points. There should be clear guidance that no noticeable noise or light should reach into people’s homes.

And finally, it is important that there should be some form of compulsory consultation around the installation of charging points.  At the moment this doesn’t exist which is wrong. Planning officers should respect the reality that installing chargers is changing where people live and work. It is important that they should have the ability to comment and suggest improvements or alternatives to planned charger installations.

When the Mayor finally has some guidance on installing electric vehicle chargers, in ways that don’t disadvantage Londoners who walk, I will gladly support the roll out of a much wider and more comprehensive network of charging points.