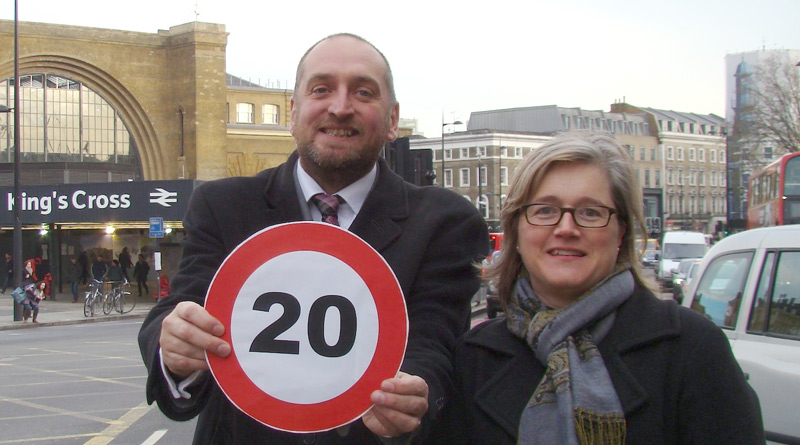 Greens and road safety campaigners, who have been fighting for lower speed limits for many years, have won a major victory with the announcement by Transport for London (TfL) of proposals that will see all roads under their control within the Congestion Charge zone designated as having a 20mph speed limit by May 2020. TfL are currently consulting on these plans. Make sure you have your say and tell the Mayor what you think.

Elected Greens on local councils were the first to convince their boroughs to adopt blanket 20mph speed limits – starting with Islington in 2009 – in a bid to save lives and make their streets more people-friendly.

This lead has since been followed by many other London councils. However, outer London has largely been excluded from these schemes and people in these areas still suffer some of the most dangerous, hostile and unpleasant roads in our city.

My report for the London Assembly Transport Committee, Hostile Streets: walking and cycling at outer London junctions, highlighted the plight of Londoners forced to pit themselves against thundering traffic in order to walk to the shops or cross the road to go to school. People, such as those who live along the A4 in Brentford, whose lives would be improved immeasurably by the simple act of slowing down the traffic.

With these very people in mind I brought a motion to the Assembly last year asking the Mayor to extend 20mph limits to outer London anywhere that there is a pavement and where people walk. Sadly, the Labour and Conservative groups chose not to support this motion, so our fight for Londoners who live in these areas to enjoy more people-friendly streets continues.

It is great news that TfL and the Mayor are finally accepting the benefits of 20mph streets for central London, but we need to look beyond the Congestion Charge zone to where most people live and where so many lives are blighted by fast, dangerous, polluting traffic.

The widespread misconception that 20 mph limits will slow down our city, has been rejected by TfL officers who have shown me clear evidence that 20mph limits do not increase journey time, and, by evening out the traffic, may actually improve the reliability of vehicle trips.

The Mayor’s ‘Vision Zero’ policy aims for zero casualties on our roads. That’s more than 2,000 fewer crashes that kill and injure Londoners in a typical year.

In addition, he is committed to cleaning up our air. If the Mayor is going to meet his target to get 80% of us walking, cycling or taking the bus every day, he will need a major shift away from car and private vehicle use. And that means making sure that roads across our city feel like places where it is safe and a pleasure to walk or cycle. Slower speeds and considerate driver behaviour will be fundamental to achieving that.

The Mayor has already committed in his transport strategy to introduce lower speed limits in London. Making 20mph the default speed limit on all TfL roads, including in outer London, where there is a pavement and people walk would transform our city.

You never stop grieving for a lost friend or family member and we should make sure that the way we manage speed on our roads is a tribute to every Londoner who has been killed or injured while walking or cycling in our city.