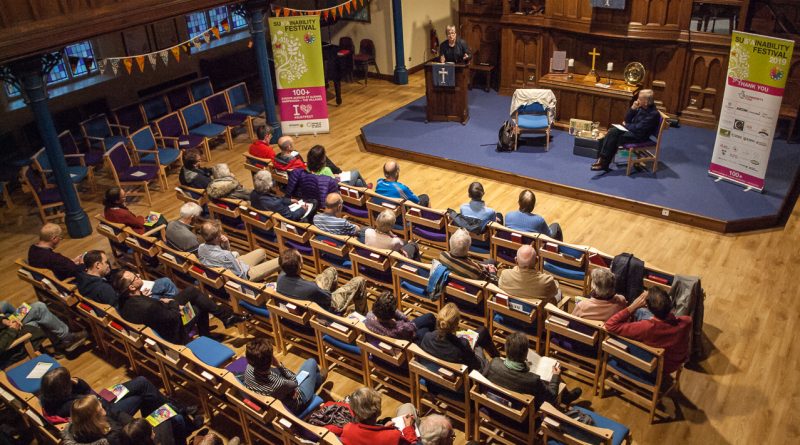 Back in May, I took part in the St Albans Sustainability Festival, speaking at a meeting arranged by St Albans Cycle Campaign on 29 May 2019. Nick Clarke kindly wrote an account of my talk and the Q and A afterwards.  Guest blogged below.

Before the meeting began, Catherine Ross of Sustainable St Albans welcomed the audience and thanked them for participating so wholeheartedly in the 100+ events throughout the three-week Sustainability Festival. John Metcalf, chair of St Albans Cycle Campaign, then introduced Caroline Russell.

Caroline began by recounting a terrible incident over 20 years ago when a child in a pushchair was killed when her buggy was pulled under the wheels of a lorry on the way to school. This galvanised Caroline into taking action on the dangers of traffic close to people. From campaigning with Living Streets and Twenty’s Plenty, Caroline became involved with the Green Party and is now their national spokesperson on transport policy.

She said that we face a ‘perfect storm’ at the moment:

Two other factors making things worse are the lack of public transport and the hostile street environment for walking and cycling.

However, in the face of this crisis, there has been an explosion of campaigning.

Caroline highlighted recent developments in London that suggest that the tide is turning. The Mayor’s new transport strategy includes, for the first time, a target for 80% of journeys to be by walking, cycling and public transport by 2041 (should be sooner, we have 11 years…). Achieving this will involve bringing down car ownership to free-up space for safe cycle routes and safe road crossings. She challenges the way we have come to accept that privately owned cars can be parked on public roads, and that most cars are unused for 95% of the time.

Shared ownership and car clubs will be components in the shift away from privately owned cars, giving access to cars only when they are needed. Towns and cities must get to grips with this shift and in changing streets so they become primarily places for healthy, happy people getting around under their own steam, rather than travelling by car. 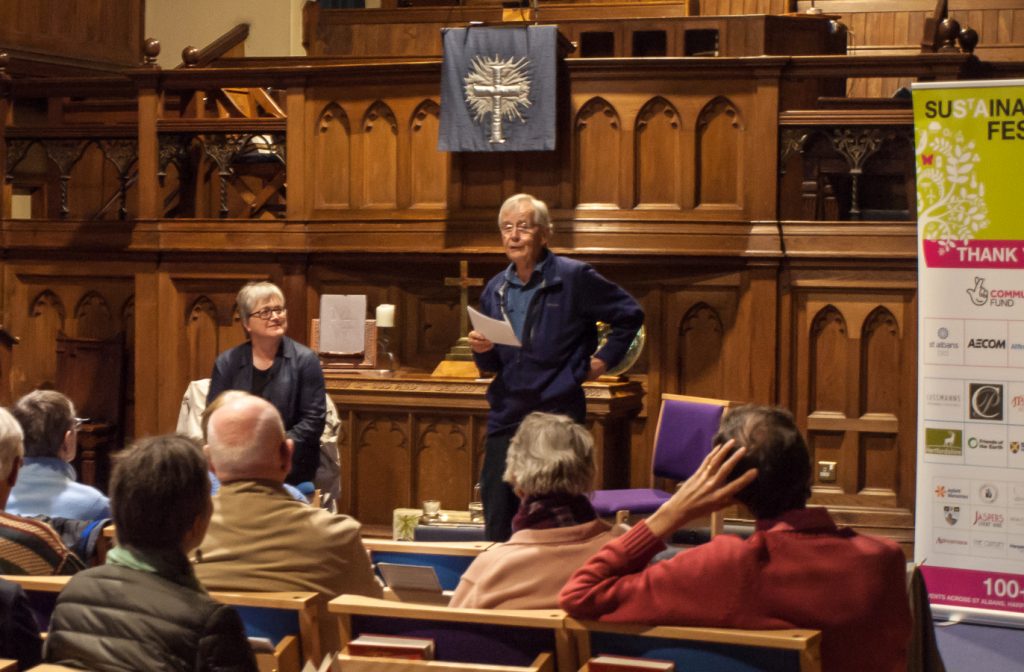 She then outlined the Healthy Streets concept developed by public health specialist Lucy Saunders. The basis of this is a matrix of 10 measures of how people feel about streets – ‘People feel safe’, ‘Easy to cross’, ‘Clean air’, and so on. Lucy Saunders has developed this into a spreadsheet tool for Transport for London engineers who must ensure that proposed changes to roads and footways do not adversely affect any of these measures. This is changing the approach taken so that people come first, not cars. Dedicated cycle tracks mean that people of all ages can relax and feel safe while using them.

The most visible evidence of this new approach is in the ‘cycle superhighways’ in central London, but these do not yet create a comprehensive network, and the situation away from the centre is, for the most part, as dreadful as ever. Children walking to school still have to negotiate major, hostile roads, and even crossing side roads may not be possible at junctions with main roads because they are often wide, and designed to enable vehicles to turn into the side roads at speed. She gave an example of an audit of a child’s walk to school along a main road in Brentford – the assessors had to walk 100m up the side roads before they could safely cross over, then walk 100m back to continue their journey.

She cited the mini-Holland project in Waltham Forest as a wonderful demonstration of a new, successful approach. Networks of residential roads bounded by major roads have bollards installed to stop rat-running, but cars can still drive to every house. Junctions where side roads join main roads are narrowed with raised continuous pavements, giving priority to people on foot, so cars have to slow down. These ‘Copenhagen’ crossings mean that traffic turning off the main roads slows right down, so these become more civilised places for people on foot and cycling. Bus stop ‘bypasses’ enable cycle routes to be built up into continuous networks.

Extensive evidence from around the world shows that this approach is good for local businesses (often contrary to the concerns and expectations of the businesses beforehand), as people come regularly to places where they feel comfortable and safe.

She concluded her inspiring talk with an outline of the London mayor’s Vision Zero, and gave the example of railways, which are designed to ‘fail safe’, ie if things go wrong the process leads to a safe shut-down . The same approach must be applied to our streets.

Before inviting questions and discussion, John Metcalf said that Hertfordshire Local Transport Plan 4 is excellent in its aspiration, but has no targets for delivery. However, he hoped that St Albans would take forward the new idea of becoming one of the county’s sustainable travel towns.

Caroline then responded fully to a wide range of questions from the audience.

E-assist cargo bikes can provide an alternative to vans for local deliveries. Sainsbury’s are using them in London, and they are commonly used in Holland by tradespeople.

Change can come about through pressure from communities who develop an inclusive vision involving politicians and everyone who will be affected, as exemplified in Waltham Forest. The approach should not be ‘We want better cycling facilities’ but ‘We want a better place to live’.

Keeping engines running while stationary is an anti-social habit, and people in queuing cars often sit in a ‘tunnel’ of polluted air. Turning off engines while stationary shouldn’t need enforcing, but pressure should be put on local authorities to run anti-idling campaigns so that it becomes socially unacceptable, like drink-driving in the 1970s. We have such a campaign underway in St Albans and we can all be inspired to support it.

Fiscal measures and road user charging are being widely discussed – London’s ultra-low emission zone will be extended to the North Circular in 2021. Caroline favours a smart road user charging approach, involving micropayments related to distance travelled and the emissions from your individual vehicle, which would encourage people to drive less, car share and use public transport.

In Islington, controlled parking zones are helping to keep cars out of residential streets, but looking 10 or more years ahead, significantly reduced car ownership is inevitable. Electric cars have some positive effects but in the climate emergency simply replacing petrol and diesel cars by electric vehicles is not enough. Recognition of air quality as a major public health issue is growing, and ‘citizen science’ projects such as monitoring NO2 levels with diffusion tubes can help, though they cannot be used to measure the equally significant particulate pollution (PM2.5). Community involvement through churches, mosques, schools, hospitals, surgeries etc can make such approaches more effective, and raise awareness that all cars pollute.

Caroline emphasized that flexible, reliable, affordable public transport options are vital. We cannot depend on each citizen investing in their own solutions – a common approach is essential. She acknowledged that buses do not at present offer enough flexibility, especially in less populated areas, and that more investment is needed if people are to accept them as acceptable alternatives to private cars. Other approaches, such as car clubs and e-bikes, also have significant parts to play.

One negative impact of electric cars is the provision of charging points on the footway, for private companies to sell electricity to fuel cars. This is another example of the assumed importance of cars, as is parking on pavements, which is sometimes justified as ‘being considerate’, even though this is only true for other drivers, not for people walking or in wheelchairs. If we want children to be able to walk and cycle to school then we must make our streets safer.

John Metcalfe thanked Caroline on behalf of all those present for her informative and inspiring talk.